The WARDRUM STAFFORDS
of Derek Smart

For those who do not know the Wardrum line they were strongly bred to the Rapparee Staffords and other closely linked Midland strains from the ‘60s. Most of the Wardrum Staffords were standard size, clean cut types without exaggeration and some had a hard edge about them. Of course there were plenty of others bred similarly in the Midlands area especially at this time, but I just liked the Wardrum Staffords type, especially Wardrum Dixie Queen, who I considered to be the best bitch I knew of at the time. 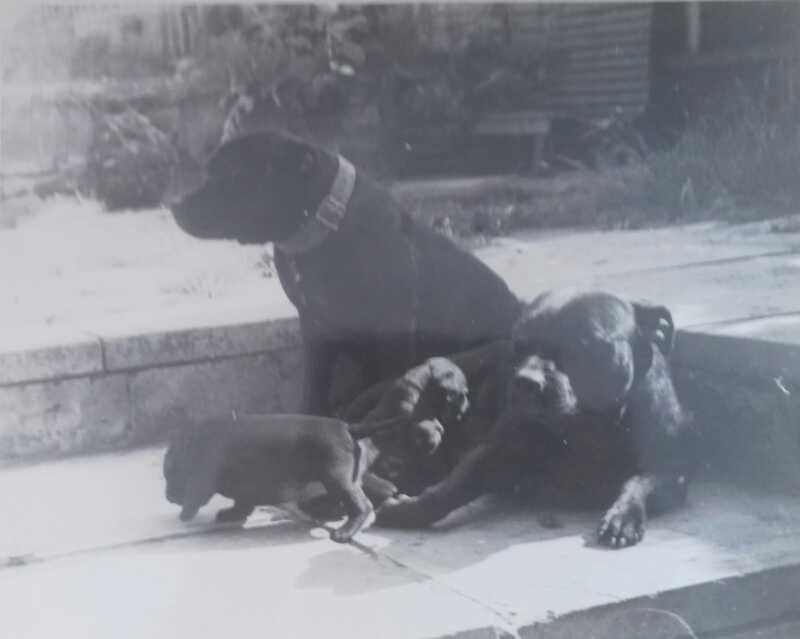 'Bonny' and 'Zac' with their pups 'Dixie' and 'Lucy'.
I first got talking to Derek in the late ‘70s, because as I said, I liked his bitch ‘Dixie’ Wardrum Dixie Queen, who later became a Champion. She was particularly well balanced and a very sound black brindle. Although feminine, there was nothing soft about her; she was hard faced with a keen expression and was a handful. She was very loyal to Derek, but was the type that could take or leave anyone else; however, I really liked her style and the strong bond she had to Derek, although she would not have been to everyone’s taste. She was the dam of my own ‘Dixie,’ Wardrum Delaware of Edgeworth, that I named after her and who in fact was a replica of her in looks and temperament, but in a smaller package. 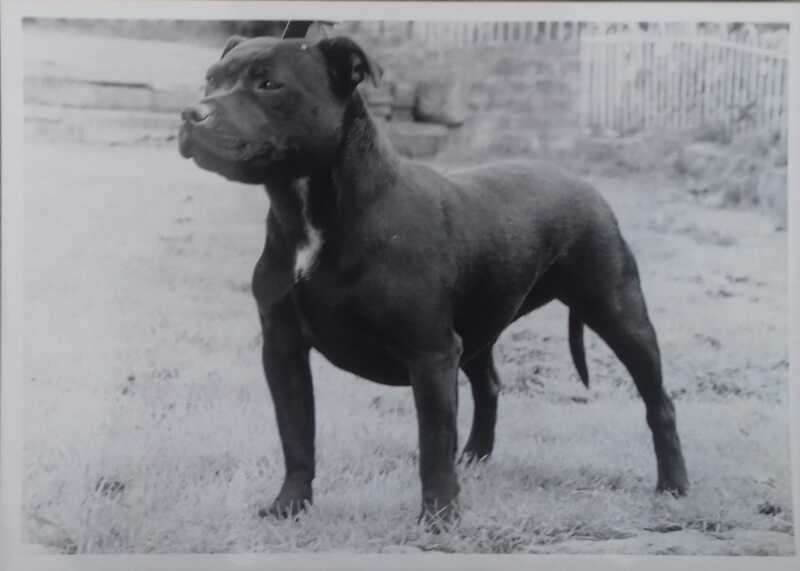 Ch. Wardrum Dixie Queen a favourite of mine.
When I visited Derek to view the litter out of Wardrum Dixie Queen I saw a strong resemblance in type that she shared with her sire ‘Zac’ Wardrum Geronimo and dam ‘Bonny’ Wardrum Black Bonita. All of them were Bull and Terrier without exaggeration and typical of the black brindles of the Rapparee line they were descended from.

It was good to see them in the flesh in their home surroundings and it gave me a feel of what they were about. ‘Dixie’ and her dam ‘Bonny’, who I particularly liked too, did not get on so they had to be kept apart. I also remember Derek bringing ‘Zac’ into the kitchen to show me. He was full of beans and hard as nails, very masculine and impressive for a standard sized dog. All were typey, clean faced with a hard eye and without lippiness. One feature of their anatomy common in these Midland strains at the time, was a good strong and deep underjaw. 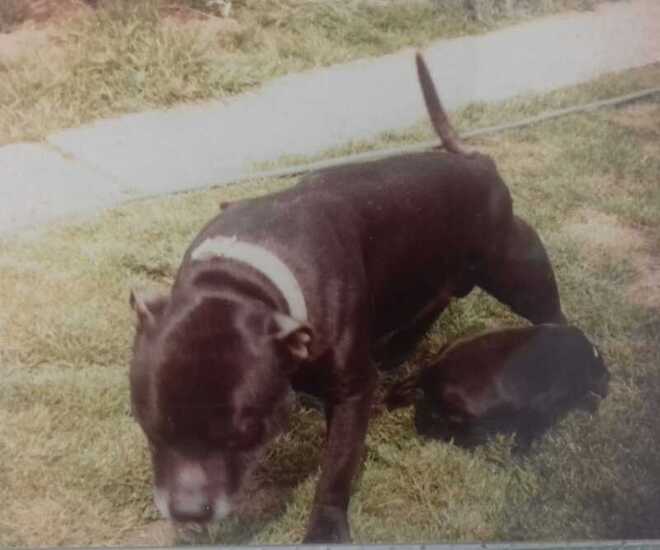 'Zac' Wardrum Geronimo, I really liked him.
Wardrum Dixie Queen had a litter sister, Wardrum Lucy Diamond, as mentioned, who I never saw, but she produced Joe Campbell’s Wardrum Settle It Samson aka ‘Sam’, a very sound and balanced Stafford, well known for his spirit. ‘Sam’ was quite a popular stud dog in the Southern Counties and he produced the pied Wardrum Smokey Joe aka ‘Oscar’ out of Wardrum Congrieve Rocket. ‘Oscar’ was owned jointly by Joe Campbell and his son Paul, again a well balanced specimen. 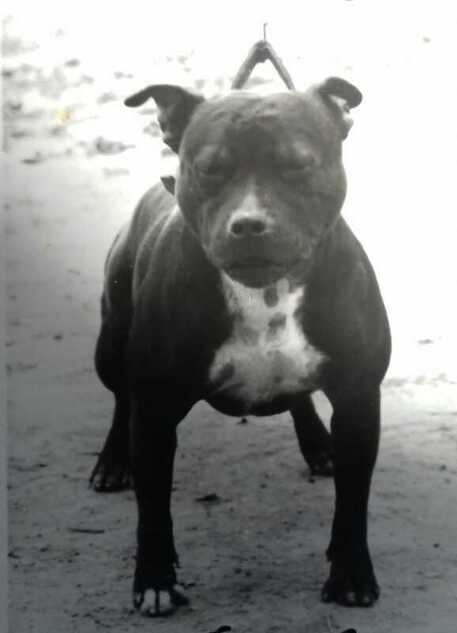 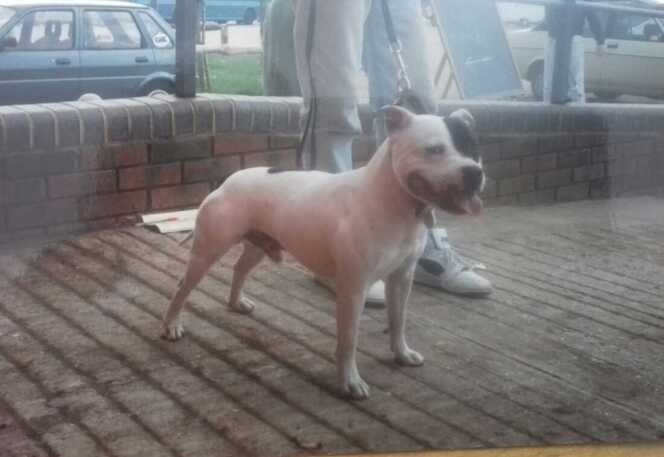 Wardrum Smokey Joe aka 'Oscar'. Owned by Paul and Joe Campbell.
Derek later mated Dixie Queen a second time, using Nancy Malec’s Yankeestaff Bolivar, a really good dog, and this produced Wardrum The Morrigan that Derek kept back and who he campaigned with some success. The Morrigan was the dam of the previously mentioned Wardrum Congrieve Rocket, who in turn produced Wardrum Fizzy Lady. I wanted to mention this, because Fizzy Lady produced a very good dog Wardrum Patriot, who lived near to me and he produced Mr. and Mrs. Holt’s home bred Finestock Duke of Bellie aka ‘Gunner’ a top sized and brilliant Stafford.

Later on for one reason or another Derek outcrossed his line with mixed results. This was something that seemed to happen to the old Rapparee and Gamestock lines, both of which were related through the famous Arthur Baxter’s/Peter Jepson’s Ch. Game Flash. As in all kennels the owners and dogs get older and the strains become harder to maintain, especially with a breed like Staffordshire Bull Terriers that require so much time. 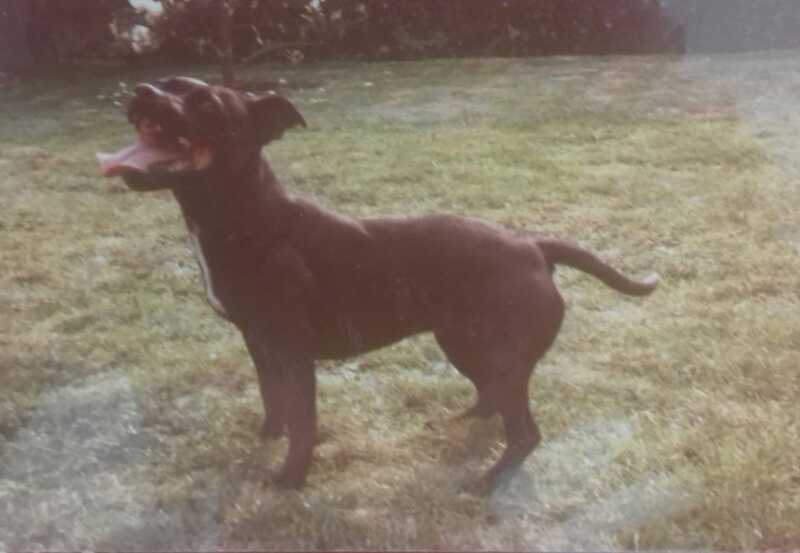 My own 'Dixie' Wardrum Delaware of Edgeworth. 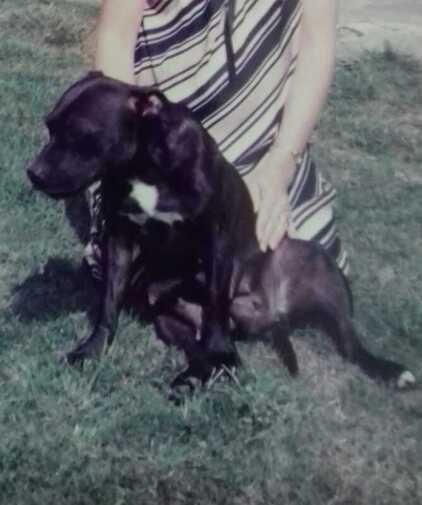 Another pic of Wardrum Delaware of Edgeworth relaxing. A replica of her dam Dixie Queen.
I have selected some pictures of the Wardrum Staffords within this article that I hope will give readers an idea of their type and put some faces to names. My own “Dixie” Wardrum Delaware of Edgeworth was a brilliant bitch to own and as good as I ever wanted - Derek bred a good one for me there!