The development of the Staffordshire Bull Terrier is an interesting one and much has been written and many opinions expressed. Long before recognition as a pure bred breed they were called Bull and Terriers, Pit Terriers or just Bull Terriers – and became known for their great courage and pluck.

Enthusiasts often refer to Staffords as the ‘old-type’ or ‘old-school’ if they have a look that resemble the early dogs. They came in different weights, lightweights to heavyweights, depending on their structure, which can be seen by some of the examples of the ‘Early Breed’ herein.

Their size/weight was approximately from 20 to 60lb, but most fell somewhere in between. They had characteristics that made them look the same generally speaking – the roundish eye, smallish ears, relatively clean face and jaw and the unmistakable expression that proves that their breeding and various bloodlines were established even before the 1850’s.

The name ‘Bull and Terrier’ does suggest that this cross was made, although some enthusiasts believe that the original baiting Bulldog is the main ancestor. Perhaps the terrier cross was more faint than a straight 50/50, it’s not black and white. Many old breeds were created, using crosses until the required ‘type’ was produced that best fulfilled the role required of it. Breeders of all kinds of livestock from dogs to farming animals know that you can only go so far with a strain before it needs an outcross or fresh blood. That is the dilemma that faces breeders, what you gain and what you lose. This could be the reason for the Bull and Terrier cross - perhaps it became necessary.

Some of the pictures shown herein date back to the middle and late 19th century of Bull and Terriers bred in the British Isles. Two of the earliest examples are that of ‘Paddy’ a pied Bull and Terrier and the brindle ‘Pilot’. Both were imported into America by ‘Cockney Charlie Lloyd,’ Paddy circa 1854 and later Pilot circa 1881. 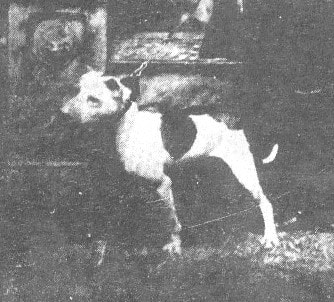 A rare picture of ‘Paddy’, circa 1854. Imported to America by ‘Cockney’ Charlie Lloyd. (The original picture shows a much younger Charlie Lloyd with Paddy, circa 1854).
In the historical book ‘The Dog Pit’ by Richard Fox, published in 1888, the author describes how dogs from England were imported into America at great cost and the pictures within it show very old examples. ‘Pilot’ is described as  brindle and white, weighing just under 28lb, bred by John Holden of the Red Lion Inn, Walsall, England by Small’s dog ‘Billy’ of Sedgley out of Tom Darby’s ‘Kit’. ‘Pilot’ became famous and is behind many bloodlines of the American Pit Bull Terrier. 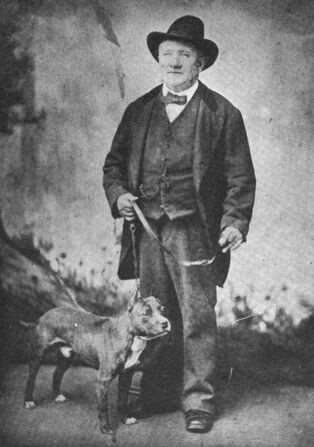 Cockney Charlie Lloyd with ‘Pilot’ circa 1881. A famous import into America, bred by John Holden of Walsall in England. ‘Pilot’ weighed under 30lb.
I have no ‘accurate’ information of ‘Paddy’s’ breeding or from where he was bred, but his name would suggest he had Irish origins. It has been well documented that many of the famous exported dogs and their breeders came from Ireland as well as England, although the Bull and Terriers of the British Isles are generally acknowledged as a native breed of England.

One of the most famous breeders of Pit Bull Terriers in the late 19th and early 20th century in America was Mr. John P. Colby who bred his strain from imports mainly from Ireland. He developed the famous Colby strain with few outcrosses, but one exception was with the imported dog ‘Galtie’ from Ireland. The picture of ‘Galtie’ herein is another unmistakable early looking Stafford and along with the examples of ‘Pilot’ and ‘Paddy’ gives an indication of the ‘type’ of the early breed back in those days bred in Ireland and England. 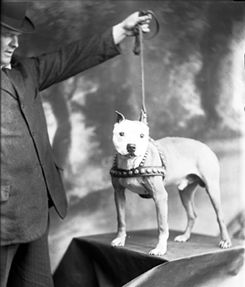 ‘Galtie’ imported to America from Ireland and owned by Mr. J.P. Colby. An example of the early breed from Ireland.
1930’s – 1940’s Black Country

Before they were officially registered Staffords were just called Bull Terriers and although they could be found in some areas of the British Isles they were virtually unknown with the exception of towns in the Black Country area of Staffordshire during the 1930-40s. No single area of the British Isles can make claim of the breed, but credit must be given to the Black Country enthusiasts and breeders, who largely formed the backbone of the breed.

The late Mr. Phil Drabble 1914-2007 the well-respected author, naturalist and broadcaster was born in the town of Bloxwich in the ‘Black Country’ in 1914; in his books ‘Of Pedigree Unknown’ and the ‘Counties Book of Staffordshire’ he gives an insight into the dog men and their dogs during the 1930s and 1940s in the Staffordshire area. His ambition, as a lad was to own a Bull Terrier – and he says, ‘in those days in Staffordshire there was only one kind of Bull Terrier - the ‘Stafford’.’ 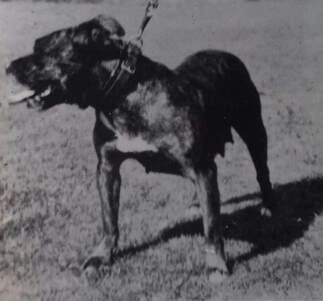 Brooks Fury in 1930 an early bitch owned by Horace Griffiths, Netherton, Dudley, W. Midlands.
Phil Drabble was from the old school and was not enthusiastic about dog shows, believing that ‘nothing spoils dogs like shows.’ Black Country dog men had their own prejudices and one firmly held and unusual, was that against the practice of inbreeding, where it was believed you would get a ‘runner’ if fresh blood was not used. Dogs and game birds were matched by weight and an old saying in the Black Country was that ‘an ounce to a cock is a pound to a dog or a stone to a man.’

He recounts how the dog men he knew from the Black Country admired courage and saw it as a great virtue in their dogs and game birds; a man’s status was often measured by the game dogs he kept. They would take their Staffords to work with them in the quarries and iron works and would also frequent the local pubs, particularly Joe Mallen’s ‘Old Crossguns’, where their Staffords would often accompany them.

He describes how the different areas within the Black Country preferred a particular type. The Walsall dogs were fairly tall and reachy, but within four miles, in the Darlaston area they had little dogs of 20 to 24lb, eight or ten pounds lighter than the Walsall dogs; while in the chain-making areas of Cradley Heath they were thicker set. It was a matter of choice, but if a dog from any type proved himself then he was used at stud.

Recognition of the Stafford

In 1932-33 Mr. Joseph Dunn decided to put forward his plans to gain recognition of the Stafford with the Kennel Club. In June, 1935 a meeting took place at Joe Mallen’s Old Cross Guns Inn, Cradley Heath, where 40 to 50 owners/breeders attended and agreed to name the club ‘The Staffordshire Bull Terrier Club’, which was accepted by the Kennel Club. 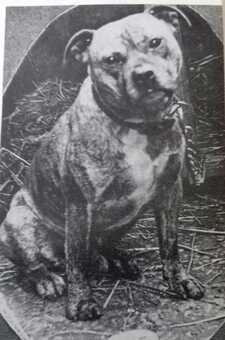 Clarke’s ‘Prince.’ Taken in 1913, when a Stafford was virtually an unknown breed in the south of England. (J. F. Gordon, Foyles, 1964).
Many of those who attended this meeting had kept Staffords all their lives and Mr. Alf Garrett stated that his family had kept them for 80 years, which would have been since the 1850’s. We must assume from this that his family acquired their Staffords from dogs bred before the 1850’s.

In 1935 the first Breed Standard was drawn up, with the two dogs in attendance being Fearless Joe and his son Jim the Dandy, thought to be two of the best specimens of the time, who helped to form the Breeds Standard’s measurements and description.

There were some misgivings among enthusiasts whether showing the breed would eventually kill it. Some from the old school of thinking thought that showing their Staffords was daft and there was no way they would take part in what they saw as a beauty parade. Unfortunately, some of these enthusiasts and their Staffords would fall by the wayside – a great loss to the breed.

Others saw it as a positive move to put the Stafford on the map and save the breed from possible extinction. Now the breed could be registered officially with written pedigrees and exhibited at Kennel Club sanctioned shows. Fortunately, some of the pioneers of the breed like Joe Mallen accepted the challenges this brought and were able to impart their great knowledge and allow their Staffords to influence future generations of the breed.

On the 17th August 1935, the Staffordshire Bull Terrier Club held its first official Club show, with Mr. H. N. Beilby judging, held on the Bowling Green of the Cradley Heath Conservative Club, South Staffordshire. There was a large entry of over 60 with ‘Jim the Dandy’ winning the day.

There is nobody in the history of the breed more famous than Joe Mallen, who owned and bred some of the more famous Staffords from the Black Country. In 1939 Mallen’s Gentleman Jim became the first official Champion Dog, with Dunn’s Lady Eve the first Champion Bitch in the same year. It should be noted that ‘Gentleman Jim’ sired approximately 250 registered offspring, which undoubtedly had a positive and lasting effect on the breed. This great dog was superbly bred, by Brindle Mick (M line) out of Triton Judy (J line), who was the litter sister to Fearless Joe. Credit must be given to Joe Mallen, who claimed he was the founder of ‘Jim’s’ bloodline, going back through ‘Monty’ to ‘Johnson’, for keeping ‘Jim’ open at public stud. 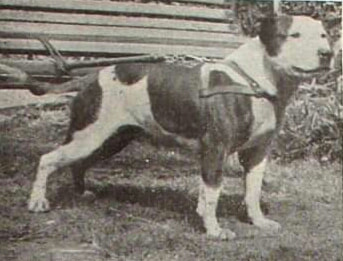 The historical pictures herein date back nearly 170 years with the earliest image shown here of Lloyds ‘Paddy’ circa 1854. These are a sample of historical Bull and Terriers bred in the British Isles that later became known as the Staffordshire Bull Terrier in 1935, although according to Mr. Joseph Dunn they were known locally in the Black Country as ‘Staffords’ before this.

Other examples show early Stafford’s in the first half of the 20th century, including some great looking dogs from the Black Country 1930s. Many other early examples of the breed are shown in Page 2 of the Archives.