Edgeworth Staffordshire Bull Terriers
Within the site I want to write about some of the Stafford enthusiasts and friends I have made during a lifetime with our breed. This is for my own and my families records and also for other enthusiasts if they share an interest in the history behind some of the present day Staffords that I have been involved with and may be behind their own Staffordshire Bull Terriers. Sadly some of my associates/friends are no longer with us so this is my way of remembering some of them.

The COYOTE STAFFORDS of Tim Sharp

I wanted to record a piece on the old Coyote line of Staffords for the site, as it's owner Tim Sharp was a dedicated Stafford man, who became a friend and bred my own Coyote Midnight Magic at Edgeworth in 1997.

The late Tim Sharpe bred the Coyote line of Staffords for many years and it was one of the longest running lines while he was alive, going back to Coyote Kim and Coyote El Fire, in the 60s. Tim lived in Derbyshire with his wife Janet and both were members of the Notts and Derby Staffordshire Bull Terrier Club. Tim was also a respected Championship Show judge.

I would call Tim an old school breeder of Staffords. He knew what he liked and did not vary too much in his breeding programme, which was line breeding. The Coyote line was a blend of mainly red lines with some Rapparee and Midland bloodlines. As an example Ripsnorter of Coyote, born in 1982, was line bred on Coyote Kid, who went back to Rapparee Rothersyke Vow and Rapparee Renegade in his 5 generation. But also had reds in his ancestry, including Jolihem Dreadnought and El Toro and also Pitbull Jeff’s Pal and Christabell. So the line was a blend of reds and brindles, quite solidly built Staffords with good bone and breed type as a rule. 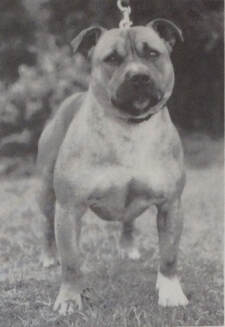 Ripsnorter of Coyote. Born 12/10/1982. A Fawn and white. A line bred dog through Coyote Kid, back to Rapparee Rothersyke Vow. Jolihem and Pitbull are also included.
Although he used good show specimens he was not afraid to breed to unshown registered Staffords if they came from his own bloodline or if he particularly liked their type. He liked a Stafford to be a Stafford and this reflected in some that I saw at shows over the years - strong dogs, but not dictated by the fads and fancies of the show world. He had his own ideas on Staffords. He bred only occasionally, limiting litters to only one per bitch as a rule and then usually had them speyed after sometimes keeping a puppy back.

Although quite different to the line I kept and those I had previously, the Coyote line did have similar links to the Rapparee line as mentioned earlier. I generally liked the Coyote Staffords and was prompted to give Tim a call after seeing his very good bitch Coyote Carmel Charm at a Notts and Derby Championship show. I liked the way she was put together and her attitude. I had thought about bringing in a bitch that I could utilise with my own line and thought It may work with the Coyote family. Tim and I had a number of conversations in the coming months and I got to know him and his ideas about Staffords. He informed me that he was reaching an end to his breeding plans with Staffords, as he was getting older and felt this might be the last litter he would breed. He offered me the pick of the bitches with the idea that he might have one back off me if his circumstances allowed.

He told me that he was going to line breed a daughter of Carmel Charm that he had kept back called Coyote Megiddo Queen. There was no pressure on me and he was happy for me to take a look when the time came and make a decision then, as he knew I also liked what I liked. There were eight pups - 5 bitches and 3 males, which included whites and red and whites. I remember going to see them when they were around 4 weeks old and it was the same day when news broke of Princess Diana’s tragic death in the early hours of that morning. 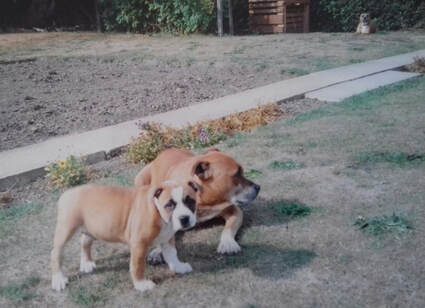 An elderly Ripsnorter relaxing with the puppy Coyote Megiddo Queen, dam of Coyote Midnight Magic.
They were a lively outgoing litter, which I liked and I had noticed two of the red and white bitches, although they were a bit young to make a concrete choice. Tim asked me to come back and take my pick early as other people interested wanted to make their choices. During my visit he showed me his old photo albums of Staffords associated with him going way back and it gave me an insight into his values. A couple of weeks later I returned with my wife and boys and Tim agreed the two bitches I liked were the picks. It was a difficult choice, but ‘Maggie’ was all over the boys and it was hard to ignore her friendly typical character so she was the one. 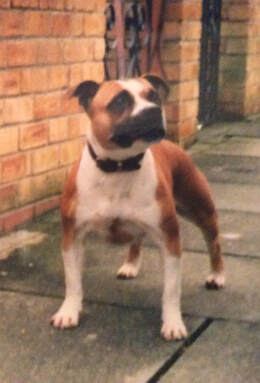 Coyote Midnight Magic, aka ‘Maggie’. 1997-2012. My pick of the litter.
Her registered name was Coyote Midnight Magic. She loved kids and everybody else that she noticed looking at her. As a puppy she would run across a park field to greet a complete stranger and did not care if they did not share her enthusiasm. You only had to catch her eye and she would be all over you. She had no fear, nor bad intentions it seemed and as an example did not harm baby rabbits after catching them when they froze to the ground. However, on the few occasions she was shown as an adult, her normal good nature changed and she became turned on in the company of other Staffords.

She produced 3 pups when mated to Sharpe Command a powerful unshown dog, who had two good sibling sisters ‘Just in Time’ and ‘High Performance’. On one of my visits Tim took me to see some local Staffords similarly bred to his own. One of his old friends, whose name escapes me had two top size powerful red bitches with plenty of bone that I liked. I think it was the same friend who had a huge red and white male getting on in years, who must have weighed 55-60lb. One of the biggest Staffords I had ever seen and built like an old-fashioned Bulldog.

My breeding plans with Maggie unfortunately did not go as planned, as circumstances delayed her next breeding. I eventually used a dog I really liked from Wales - Hector Macho Camacho owned by Mark James. Unfortunately ‘Maggie’ missed and not long after had to be spayed because of Pyometra. She went on to live for 15 years and was a terrific family dog. It brings a smile when I remember her as a puppy, the day she first met Sly and her daughter Lilly in their pens, doing circuits around the garden in a mad half hour while they looked on licking their lips.

Because of circumstances I was not able to fulfill my plans, but anybody who has Coyote blood in their Staffords pedigree, which will be way back now, can be sure that they were bred by a dedicated and knowledgeable enthusiast, not forgotten, Tim Sharp.