Edgeworth Staffordshire Bull Terriers
The following article on the extinct and little-known Blue Paul appeared in the S.C.S.B.T.S. Newsletter in May 1968, edited by Jimmy Russ (Relyon). The article is reproduced here for historical interest. There has always been the Blue colouration in the Staffordshire Bull Terrier, although it was rare until the years following the Millenium. Mr. H. N. Beilby wrote that the most outstanding example of a dilute was seen in that ‘grand old dog Fearless Joe’, who was a fawn (light biscuit colour) and had a bluish colouration in his mask.

The Blue Paul was undoubtedly a Scottish breed of dog, peculiar to the West, where the sport of dog-fighting was carried on. These dogs were really very similar to what was known as the Staffordshire Bull Terrier, the fighting dogs of the Black Country – the chainmakers’ dogs of Cradley Heath – only they were heavier. The canine gladiators were all graded as to weight.

The Staffordshires were, as a rule, all red or all brindle in colour, although an occasional blue one turned up. The Blue Pauls were of an all-blue colour, but they in turn sometimes produced brindles and also reds. The latter were known as Red Smuts in Scotland. No one seemed to have any knowledge as to how they were bred or from whence they originally came. There was a story that Paul Jones, the pirate brought them from abroad and landed some when he revisited his native town of Kirkudbright about 1770.

The gipsies around the Kirkintillock district kept a lot of Blue Pauls, which they fought for their own amusement. They maintained that the breed originally came from the Galloway coast, which lent colour to the Paul Jones legend. In those days the Glasgow contingent were the leaders in the dog-fighting world, and when heavy-weights were in demand they usually put a Blue Paul in the field. These challenges were all advertised in “Bell’s Life” and many great fights were brought off in the Burnside district of Rutherglen and the Baillieston district on the banks of the Canal up to the ‘eighties’. From all the writings on this now extinct variety, all seemed to be agreed that they were a very intelligent breed of dog, in spite of the somewhat cruel sport they were used in. They were affectionate and tractable, obedient to a fault when engaged in their work, and mute even under the most trying circumstances. They were game to the death, and could suffer much punishment. They were expert and tricky in their fighting tactics, which made them great favourites with those who indulged in this sport. The nearest approach to them amongst our present-day dogs would be the Bull Mastiff.

Mr. James B. Morrison of Greenock, the leading authority on all Scottish breeds of dogs in the ‘eighties’ (1880’s), was the last to exhibit a Blue Paul dog. It was a pleasing blue colour, and it was named Paul, but had no pedigree. It was supposed to have been bred in the Kirkintilloch district. The following is the description of the breed.

“The general appearance of the Blue Paul was that of a smooth-coated, powerfully built cobby dog about forty-five pounds weight and about twenty inches at the shoulder, more after the style of the Bulldog than any other of the present fancy. Head – large, forehead flat, muzzle short and square; nose black, large and broad, but not receding like that of the Bulldog; jaws and lips even, with no overhanging flews; slight stop between the eyes, which should be dark hazel, and neither sunken nor prominent, with no white or haw seen; ears – small and thin, set on high and invariably cropped; the face not wrinkled, but eyebrows contracted or knit, and, as the dog lowered one side of his head when at attention, this, with the contraction of the eyebrows, gave the dog a peculiarly intelligent but comical look; in fact, there was an expression in the face of the Blue Paul that has never been seen in any other breed, and one can frequently recognise this blood in cross-bred dogs from this peculiarity. Body – round and well-ribbed up; back – short, broad and muscular, but not roached; chest very deep and wide; tail set on low, devoid of fringe and rather drooping in carriage, never rising above the back; the dog standing straight and firmly on its legs. Forelegs very stout and muscular, showing no curve, with elbows standing in towards the ribs; hind legs and thighs very thick, strong and well furnished with muscle. The colour was the peculiar shade of dark blue we see occasionally in greyhounds.” 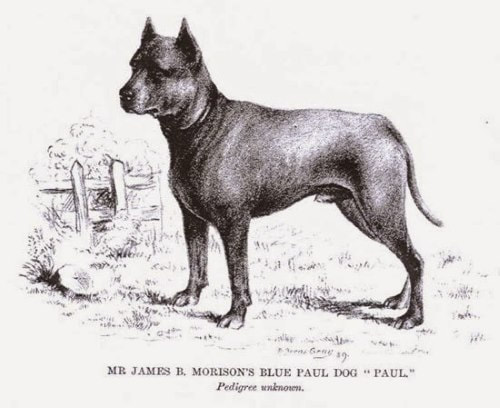