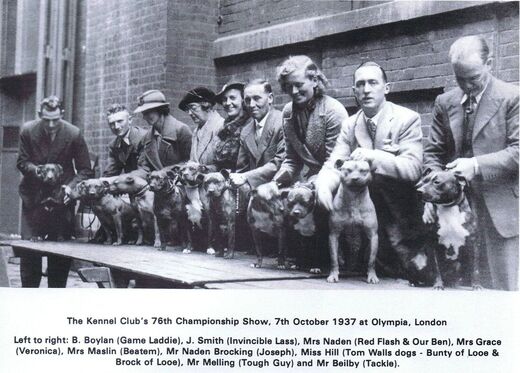 Mr. Beilby established six main Lines, being the M, J, L, R, B and C and 60 bitch Families. The Lines were given the initial of the Sire’s name and the bitch Families were numbered, i.e. Family 2.  In those days the Lines and Families had a distinct importance and progressed in accordance with a sire or bitches popularity or reputation. Figures on the right show the number of registrations recorded at the end of 1946 sired by these males.

These Lines and Families were published in ‘The Stafford’ magazine and charts updated regularly at first. They helped breeders and enthusiasts to follow a particular Line or Family of their choice and elevated the importance of their stock and establish a line breeding programme of their own at this time. Registrations and pedigrees were now able to be recorded with an official body – the Kennel Club.

Many enthusiasts in those days strongly favoured Staffords of a particular Line or Family and bred to it, bearing in mind that these dogs and bitches could be seen close up on pedigrees of that time. Even in the 60’s and 70’s some enthusiasts still referred to their Staffords Line or Family and kept their breedings quite close to them. I remember corresponding with Arthur Baxter in the late 60’s and he pointed out the ‘Lines’ from which his stock descended. My uncle would also refer to the Line or Family from which a particular Stafford descended from, as if it was obvious. 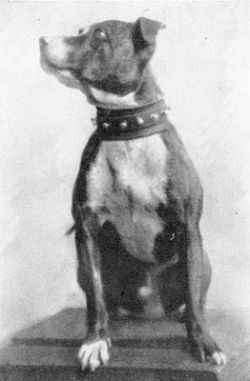 Mallen's 'Johnson' circa 1924. Grandsire of Fearless Joe, founder of the J-Line.
The J-Line was favoured mostly by Black Country enthusiasts, whose founder was Fearless Joe, grandson of the famous ‘Johnson’.  ‘Joe’ sired Jim the Dandy, who unfortunately died young, but not before sireing Tackle and Chestonion Overdraft. Tackle sired Brigands Gunner, Tactful Steve, O’Boy and Emden Convoy. Vindictive Monty another important son of Fearless Joe sired Vindictive Montyson and Springheeled Jack, who produced Boy Dan and The Great Bomber. 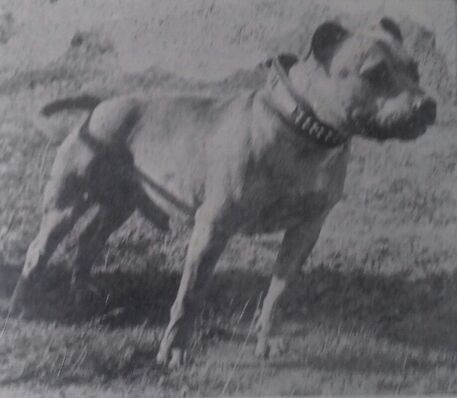 The J-Line would not be complete without recognising 'The Great Bomber'. He sired the important 'Bomber Command'.
Boy Dan sired the well-known Brinstock Challenger. The Great Bomber sired Bomber Command from which some of the Wychbury dogs descended through Faithful Pal. Bomber Command also sired Ch. Peter the Bomber, in turn, siring Ch. Peter’s Boy, who sired Ch. Wawocan Benita (b) and Ch. Iron Bill of Phylmajhar. Ch. Sandra’s Boy, who sired the famous bitch Ch. Tawney of Dugarde who was also sired by Bomber Command. These are possibly the most important earlier Staffords from the J-Line, but later came the well known Ch. Major in Command of Wychbury and a number of others not mentioned here. 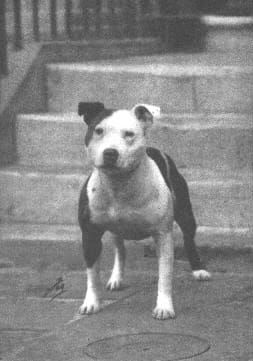 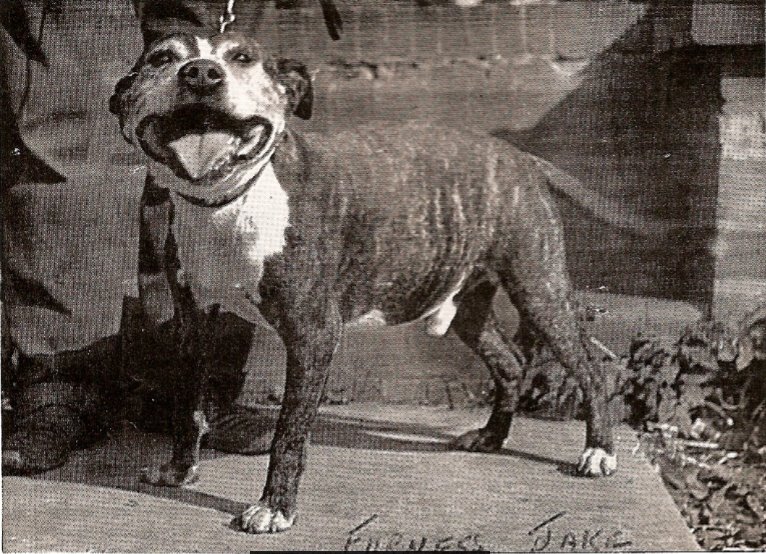 'Furnace Jake,' sired by Brindle Mick. Highly regarded by some of the old timers. He sired the well-known bitch 'Perfect Lady'.
Jolly Roger out of Son of Jim was also an important sire, producing Ch. Quiz of Wyncroft, Ch. Corsair of Wyncole, Ch. Brigands Red Rogerson, Ch. Emden Corsican and Brigands Benbrooke Pirate. Of course the M-Line was extensive and famous for many other good ones – far too many to mention here.

Although the M-Line became the most popular it had strong links with the J-Line. As mentioned earlier Ch. Gentleman Jim a prolific sire, was M-Line, but his dam Triton Judy was J-Line. Brindle Mick himself was out of Brave Nell a J-Line bitch sired by Fearless Joe. These two lines always had close links and an example later during the 1960’s and 1970’s were of the two well known M-Line males Ch. Game Flash and his son Ch. Rapparee Renegade, who both carried J-Line blood through their dam’s side. 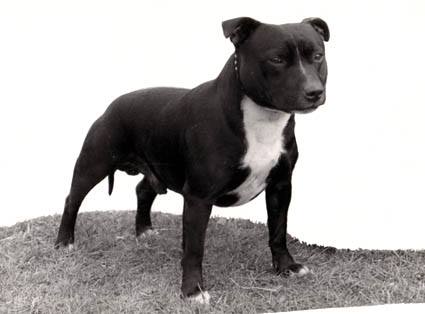 Ch. Game Flash, owners Baxter and Peter Jepson. Influential stud of the 60s and 70s and highly thought of by Black Country enthusiasts. 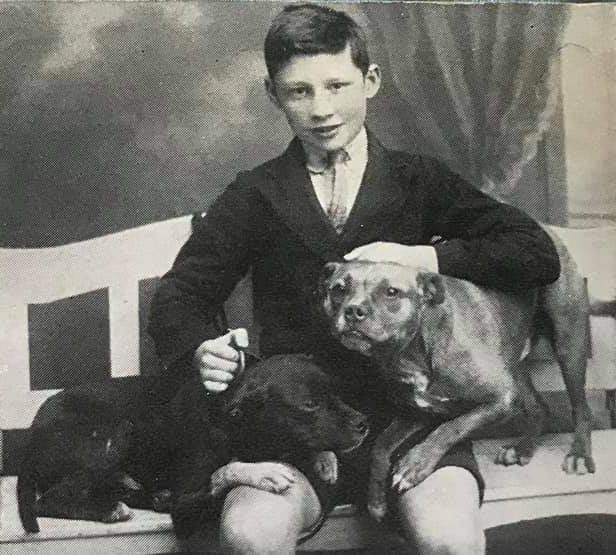 Tommy Westall 1923, with the puppy Hyena on the left and the lighter Rum Bottle.
The B-Line for Rum ‘Bottle’ is better known as the Tommy Westall Line. This was an old line founded by Mr. Westalls grandfather circa 1868. It actually started with a dog called Rascal, who produced Game Cock and Scorpion. The most notable dog of this line was ‘Rum Bottle’, which was a red dog of 35lb, sired by Game Cock. Scorpion sired Hyena (Mulberry Masterpiece). One of the most famous dogs of this line was Henry Melling’s Tough Guy, by Rum Bottle out of Viper and was advertised from game bred stock in those days. Rum Bottle also sired Invincible Lad and Eager Lad when mated to Invincible Lass. Eager Lad also sired Tornado, who sired some of the Roundcroft Staffords, through to Idol Bruce and Ch. Constones Ballyhill Bruce. 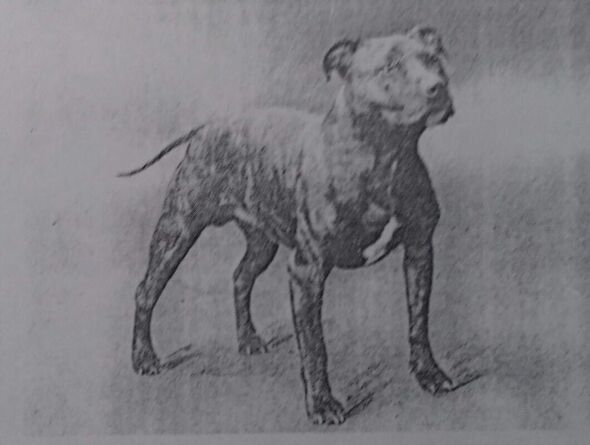 The B-Line 'Tornado' sired by Eager Lad, who was sired by Rum Bottle. Tornado sired some of the highly regarded Roundcroft Staffords. 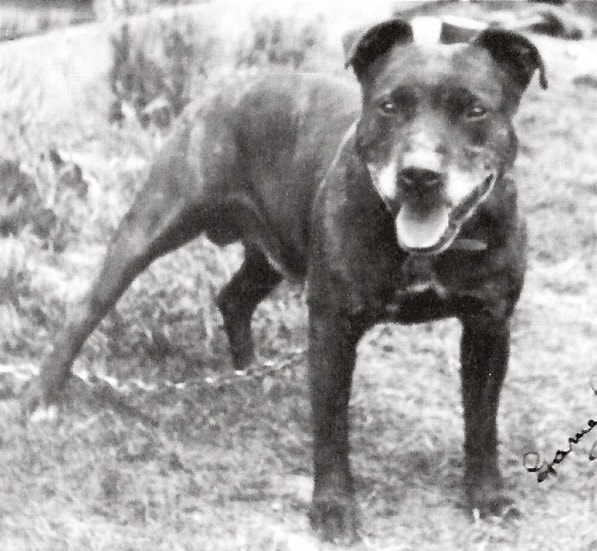 Game Lad founder of the L-Line, sired Bill Boylan's famous Game Laddie. This was another Line originating from the Black Country.
The L-Line founded by Game Lad was also from the Black Country and he was a prolific sire in his day and of course produced the outstanding Ch. Game Laddie owned by Mr. Bill Boylan, who must be given credit for the development of this Line and his knowledge of Staffords. Brinstock Democrat was out of ‘Laddie’ and later came Brigands Bash’em, who was out of Belted Hero a grandson of Game Lad. 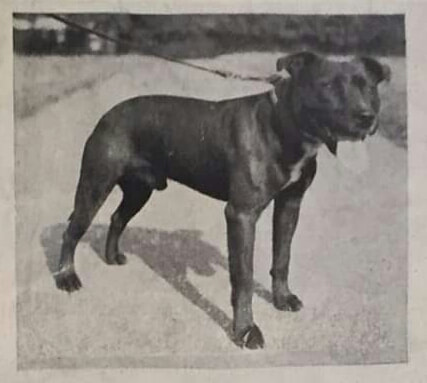 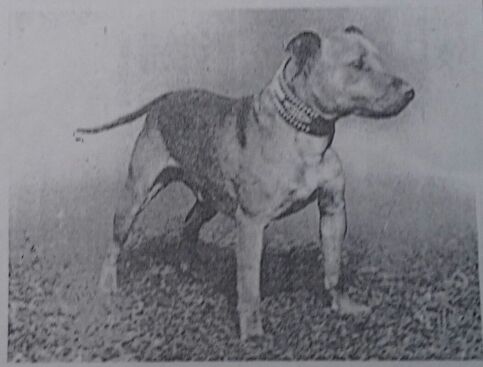 The R-Line Emden Czarist by Vindictive Monty of Wyncroft, who was by Ribchester Max.
Ribchester Bob the founder of the R-Line, sired Ribchester Joe, who in turn sired the well-known Mulberry Move On and Ribchester Max. One of ‘Max’s son’s was Vindictive Monty of Wyncroft, who sired Emden Czarist and also Ch. Head Lad of Vilmar, who sired Ch. Milkern Guardsman, who sired Ch. Gilcroft Guardson. For many years ‘Milkern Guardsman’ held the honour of appearing as the S.C.S.B.T.S. badge logo with the wording ‘Nemo Me Impune Lacesit’, founded in 1937. 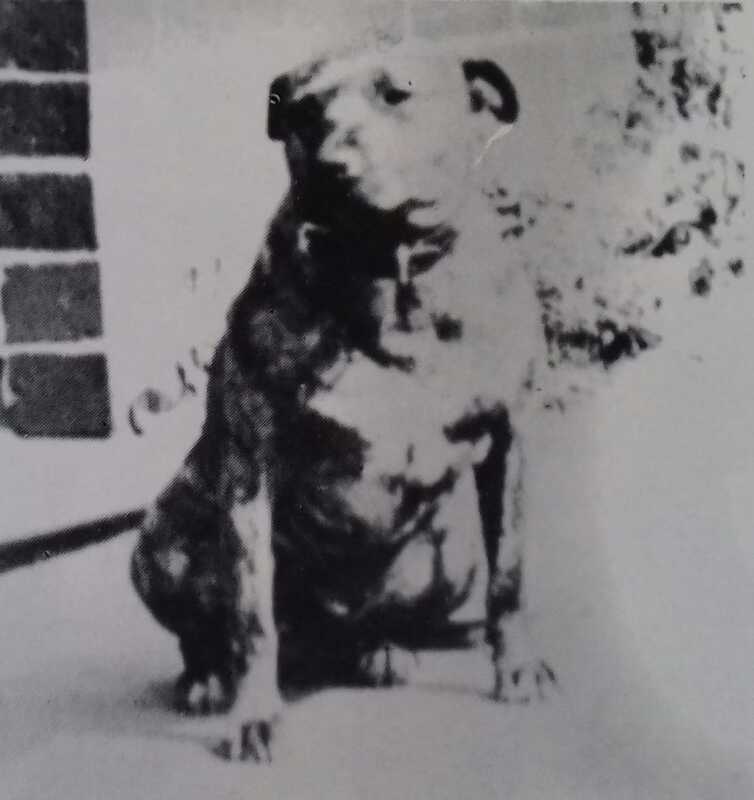 Cinderbank Beauty in 1930. Owner Mr. C. Hardwick. Sired 100 registered progeny at the end of 1946, including the highly thought of 'Pike Lane Spitfire.'
Cinderbank Beauty C-Line was perhaps the least well known Line, but had sired 100 registered progeny at the end of 1946, and sired Togo, who sired Pike Lane Spitfire and the superb bitch Ch. Widneyland Model. Two other bitches that came from this line were Ch. Gwornall Eve and Ch. Gwornall Judith. 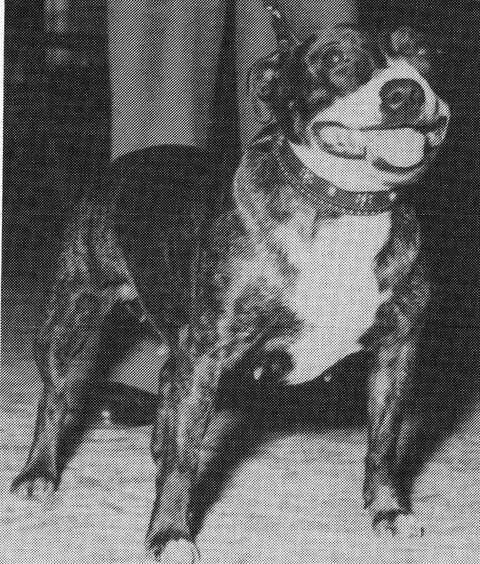 'Ch. Gwornall Judith' 1954 from the C-Line. Owned by Johnson, bred by Cartwright. Showing her typical expression.
I had not heard anybody mention these old lines for many years until I spoke to Peter Jepson back in June 2018, a few years before he died. I was not surprised when he recalled some of the old J-Line and M-Line dogs that he owned or were behind his ‘Gamestock’ Staffords pedigrees. Not only did he have great knowledge of the breed, but credit must be given to him for his foresight, bringing Ch. Game Flash to his Gamestock Kennels in Ripley, Surrey in the 1960’s and making this bloodline available and more accessible in the South of England.

He line bred his stock, producing many notable Staffords with the Gamestock affix, which breeders were able to access through his stud dogs. Two outstanding examples in my opinion were Josie Ashburner’s ‘Cubik Snow Rocket’ (1969) and Penny Funnell’s ‘Ladstaff Fireball’ (1977). Both were strongly bred back to Ch. Game Flash. Cubik Snow Rocket was sired by Gamestock Black Jack and Ladstaff Fireball was sired by Gamestock King Mick. These two long-time Stafford fanciers are still enthusiastically showing their present day Staffords.
The last dog Peter showed if I am correct was ‘Bomber Bill of Gamestock’ a bull of a dog, but absolutely teeming with character. In 1986 ‘Bomber Bill’ sired an outstanding son in my opinion called ‘Our Darkest Midnight’, who was shown at the East Anglian Club shows, a big 17-18 inch black brindle that knocked my eye out!

Although these Lines and Families are no longer so relevant and some no longer exist, they are not all extinct. All Staffordshire Bull Terrier pedigrees and bloodlines go back to these early dogs, but some lines have become mixed. The pictures shown herein are just a few examples of Staffords from these Lines and Families, but they have all helped to influence us and the breed we have today.

There are obviously far too many important well-known Staffords from past era’s up to the present day to mention and this is just a glimpse. I have often been asked what are the best I have seen, but when I think about it I come up with a list as long as my arm and then realize I have missed several out and that is without mentioning some that were rarely shown or never saw a show ring.

Back in the 80’s I once asked Freddie Phillips (Cradbury) that stalwart from the Black Country his views and if he thought the breed had changed. Freddie produced the photographic magazines and told me, ‘there were always some good ones and many not so good.’ I think the same still applies, but we all take the best dogs home.

For those who like ‘brain tanglers’ here is one which shows how the ‘M’ and ‘J’ Lines of Staffordshires are connected.

It will be more readily followed if the chart is traced at each step. (Fig. 1)
Joe Mallen mated his bitch ‘Rose’ to a dog named ‘Mick,’ belonging to a Mr. Edwards; this produced ‘Johnson’. ‘Johnson’ was bred with Mr. Stoner’s ‘Lady,’ and had two sons known as ‘Mallens Brindle’ and ‘Monty.’

‘Monty’ was mated to another of Joe’s bitches called ‘Nell,’ which resulted in the birth of ‘Fearless Joe,’ who went to H. Pegg, and ‘Triton Judy,’ who became Jack Dunn’s property.

‘Mallens Brindle’ when bred to ‘Garratts Floss’ produced a bitch which was registered as ‘Queenie’ and owned by Mr. Silver.

This bitch was mated to her cousin, ‘Fearless Joe,’ and had a litter which contained ‘Vindictive Monty’ and ‘Brave Nell.’

‘Brave Nell’ was then out-crossed to Mr. Perry’s ‘Tiger’ (whose sire and dam are mere names to the writer), and produced the ‘one and only’ ‘Brindle Mick.’

‘Mick’ when bred with his grand-aunt ‘Triton Judy’ became the sire of ‘Gentleman Jim.’
It will be seen that on his dam’s side ‘Mick’ is strongly bred to the ‘J’ Line. 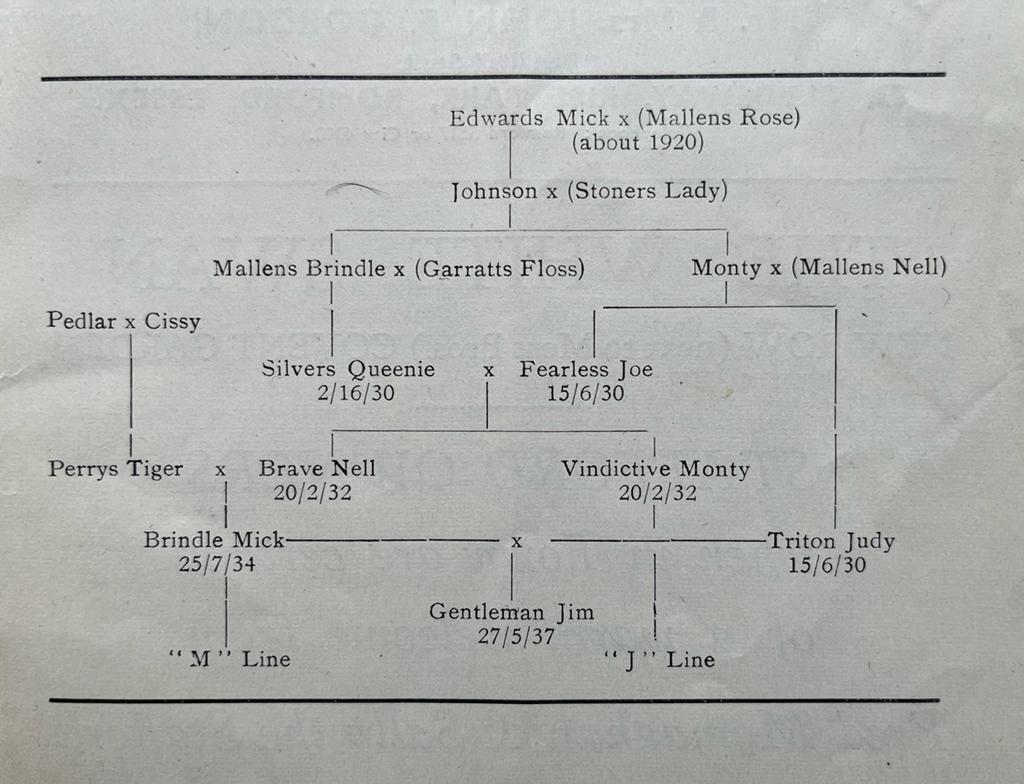