I have included this article on ‘Bosun’, my uncles Glen of Imaal Terrier, as he was in his lifetime quite a talking point within family circles. My uncle Terry’s first breed was always Stafford’s, but he had an interest in the Glen of Imaal Terrier and imported ‘Bosun’ from Dublin, Ireland in 1957. My cousin Terence, who grew up with my uncles Staffords and ‘Bosun,’ has passed on to me ‘Bosun’s details and pictures, some of which I have included. I hope these will be of interest to enthusiasts of the breed. 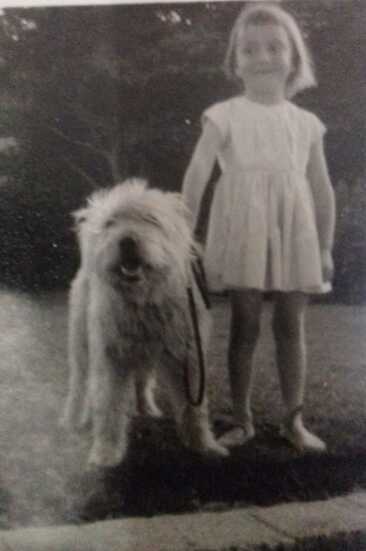 My cousin Sarah with Bosun, circa late 1950's. Sarah still has a love of Staffords.
The Glen of Imaal Terrier is named after this Glen in County Wicklow, Eire. Historically the breed had been used for centuries for working purposes and heavy wagers were made on their chances of victory. The breed became known for its tenacity in the badger field trials and before it could become a full Champion had to posses the Teastac Misneac (Dead Game Certificate) – this was before the trials were outlawed.

The Irish Kennel Club advised my uncle to contact Mr. D. O’Donoghue from Dublin, who was the Hon. Secretary of the Glen of Imaal Terrier Club that had been formed in an attempt to help popularise this rare old National Irish Breed. The breed was first entered on the Breed Register of the Irish Kennel Club in April, 1934.

Mr. O’Donoghue wrote to my uncle, that if interested, he had a male that was the best in the litter, but too big for his preferences. The breed was virtually unknown in England and my uncle thought this was an offer to good to miss and decided to take this rare opportunity. I still have the letters sent from Mr. O’Donoghue. ‘Bosun’ was born on the 22 June, 1957, registered as Ballyroan Mick by Coolboy out of Ballyroan Nora. He became the very first Glen of Imaal Terrier to be registered with the English Kennel Club, as previous to this the English KC did not recognise them. 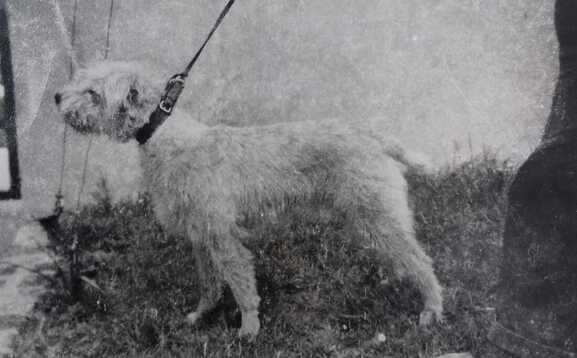 Ballyroan Mick - 'Bosun', bred by Mr. D. O'Donoghue. Dublin, Ireland. 1957. Owner Mr. Terry Knowles.
I have only seen a few, but ‘Bosun’ was the biggest and without doubt the best Glen of Imaal I have ever seen in my humble opinion. Wheaten in colour, Bosun must have been at least 16 inches in height when adult and very hard to the feel. The late Seamus McNutt the well known Stafford enthusiast from Ireland asked me for ‘Bosun’s’ details and informed me that some ‘Glen’s’ could be bigger in some litters in those days.

‘Bosun’ was five years old when my uncle acquired his next Stafford ‘Bess’ - Edgeworth Bess after ‘Nell’ Bakers Girl had died. I can remember accompanying my uncle and father when exercising them together, pulling very hard and choking into their collars, with their chins almost scraping the ground as they strained pushing forward, eyes focused, trying to get in front of each other. ‘Bosun’ lived to a good age, but went blind in his later years, but this never seemed to bother him.

Terence recalled, how several years ago he happened to be working with some Irish dog-men on a building site. In the canteen the conversation turned to dogs and Glen of Imaal's and naturally they were quite surprised that Terence had any knowledge of this rare breed, especially when he told them that when he was a lad his father imported one from Dublin, Ireland in 1957! They shared some banter, and were not convinced of Terence's story until the next day when he showed them Bosun's photo and registration details.

It is difficult to compare the Glen of Imaal and the Stafford, but I would certainly love to own another 'Bosun'. 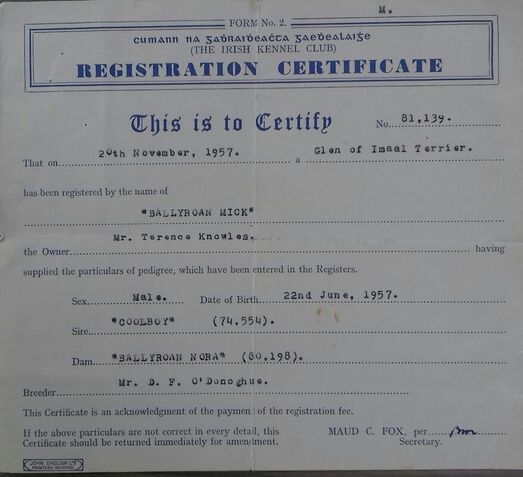 Irish Kennel Club Registration Certificate for Ballyroan Mick. DoB 22 June, 1957.
(The following is copied from an old description sheet I have, year unknown.)

Head. Eyes. Ears.
The Head should be strong of good width, fair length, light ear, carried variously, with a foreface of power under the eyes, of a Brown colour placed well apart, with a pronounced stop, tapering nicely to the nose, showing no sign of the Bottle Head as seen in some of the other Breeds.

Feet. Legs.
The legs are of great importance, which must be rather short, but of great bone, the chest to be wide and strong, the front legs bowed and feet splayed. The feet must be compact with pads strong and rounded.

Coat Colour.
Coat inclined to be of a short texture, medium length (must not be trimmed). Wheaten or Blue Brindle in colour, but the former preferred.

Loins. Ribs.
Loin must be strong, with the body deep and long, the Ribs to be well-sprung without the appearance of the Barrel or flat Rib.

Tail. Stern.
The Tail must be strong at the insertion, well set on, and carried gaily, the Hips to be well muscled.

Height.
Not more than 14 inches.

Character.
Dead game and full of courage when called on, otherwise gentle and docile.