Bakers Girl with my cousin Pat
​Staffords have been kept by the Knowles family for nearly 70 years.  My father and his brother, my uncle Terry, grew up with old fashioned English Bulldogs during the 1920s, owned by my great grandfather, who kept them in his coal yard in the East End of London. The Bulldogs were used to guard the yard and it was through the association with these that my uncle became interested in the Stafford.

My late uncle went on to become a keen Stafford enthusiast. He was a member of the S.C.S.B.T.S during its early formation and would take me to its shows and Crufts every year, where I met some of his friends, including Fred Clarke of Curfews fame and Arnold Thomas, who owned Ch. Iron Bill. Fred also bred one of my uncles early bitches - Bakers Girl, pictured with my cousin Pat (top picture).

After the war my father and uncle trained to become bricklayers and the conversations between them would invariably be about work, Boxing and Staffords. My uncle would talk of the Staffords he liked, the characters and their dogs past and present. It is easy to see why he admired the breed, the well known courage and reliable temperament with children.

He kept his Staffords pretty fit, they were not fed titbits. My cousin Terence and I would use a yard broom as a lure and his ‘Bess’ would be leaping and twisting in mid air to get a hold of it. My uncle would keep a close eye and then instruct us to ‘put her away and let her calm down.’

I couldn’t wait to own a Stafford when I was old enough. I would read his ‘Stafford’ magazines and Newsletters of the SCSBTS and take note of the photos and stud register. There was no internet, Facebook or mobile phones then so getting my hands on these was invaluable to my knowledge. (It was also much harder to get a decent photo, as you will probably notice from my efforts on this site!)

We attended many shows together and I found it fascinating to hear his discussions with other enthusiasts of the time. The SCSBTS Championship Shows used to be held at the Manor Place Baths in the Walworth Road back in the 60s. To see so many Staffords under one roof for the first time was amazing, bearing in mind the breed was much less common then - you rarely saw one. Back then people would stop you in the street and ask about your Stafford. I have had strangers stop their car and get out for a chat, giving my dog a once over. Times have changed.

But those initial memories of the shows are still clear in my mind and I know there are some still around reading this, who will recall the likes of Curfews White Orchid, Christopher of Geneva, Benext Beau and Benext Besom (who I much preferred to Beau), Mizzanda Courageous Dan and Linksbury Augustus to name a few, who were shown regularly in that era at Southern Counties shows.

But the dog I liked best of all and the one I looked for first was Benext Brutus, owned by Albert Wood. He was a standard sized black brindle with terrific breed type, a really well balanced Bull and Terrier. He was like a bull in a china shop, boisterous, friendly, but on his toes. A great dog.

In 1967 my uncle gave me my first Stafford puppy registered as Game Bess in my name, by Ch. Rapparee Renegade out of his bitch Edgeworth Bess. A great day. I remember the pups were playing in the garden on a sunny day. When it was time to go he told me to go and pick up my pup. This was the year I first joined the SCSBTS.

Through the years I have owned and bred Staffords from different lines, as well as some of my own, mainly due to the fact that it was difficult to maintain a line without being always able to run a dog on. And some bad luck with Pyometra, upsetting breeding plans. However, our dogs have been and still are a big part of the families life and we remember them all.

Looking to the future it is today’s new generation who will influence the breed and hopefully the evidence I have seen recently of youngsters judging, and choosing the well balanced  Stafford bodes well for the breeds future.

However,  the Stafford fundamentally is a very strong dog for his size, be it leaning to the terrier type, bull type or the ideal balanced blend of the two. I fear that whilst line breeding can fix type, too much brings weaknesses health wise and tends to diminish size and strength. It can create an almost foreign look if used too much and temperament suffers.

I think it wise that breeders use the outcross more often and then come back to keep things healthy. I have lost count of the times I have read and heard the advice ‘find your bitch a good dog of the same line and use it.’

What if there isn’t a really good dog from the same line that you like available? Do you suffer second best? One should also consider that the intended stud dog does not carry the same faults as your bitch. This should obviously be the case with any breeding plans, but especially in line breeding where a common fault will almost certainly be stamped in and not easy to correct. What if you have seen a really good typey dog from a different line that you consider is a much better dog? I feel that using the Best dog is a strong argument.

It’s sometimes difficult not to be influenced and there is nothing wrong with good advice, but be true to yourself after all it is your bitch. The chances are your breeding programme will fair better and your line healthier if the combination of line breeding and outcrossing is used more often.
​
Phil Knowles

In 1957 another uncle, my uncle Harry, acquired Longtonion Micky Boy ‘Mick’ from Mr David Wheat, of Meir, Stoke on Trent, Staffordshire. He was sired by Longtonion Black Beauty x Longtonion Gem. ‘ Mick was a solid brindle, a more common colour back then. I had great times playing with Mick, which further cemented my love for Staffords. His sire Longtonion Black Beauty used to be advertised at stud in ‘The Stafford’ magazine with his picture. I still have the letter from Mr Wheat to my uncle Terry in reply to his initial inquiry regarding using Longtonion Black Beauty for stud service.
Mick was about 17 inches in height and weighed approximately 40lb. He was a Stafford true in temperament. He was line bred Jolly Roger and had some good ones in his pedigree including Ch. Quiz of Wyncroft, Ch. Chestonion Annoyance, Honest Joe, Tenacious Pete, Ch. Widneyland Kim and Clarkstead Pete. 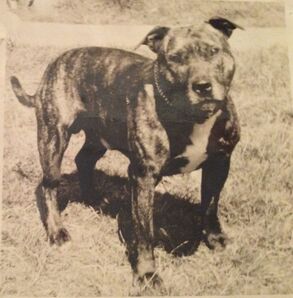